What's Real And What's Not: Creating The Brotherhood of Andrew (Antagonist For The Awakening Series)

When I started The Awakening Series I had two “What Ifs” in mind:

While each of the four books in The Awakening Series features a specific individual character as the antagonist, the real antagonist for the entire series is that religious group, the Brotherhood of Andrew of Crete.


The Brotherhood needed to be traditional and Christian Order so its members would believe in the story of the Virgin Mary and would be shocked at the idea of a potential female messiah.

But I didn't want the Order to be part of an actual, specific branch of Christianity.


As the antagonist, the Order would do things that from my main character’s perspective (and probably the reader's perspective) were evil. I didn’t want to associate that with a real religion or suggest any actual religious group was wrong or evil.
That’s why throughout the books, Brotherhood members refer to concepts that come from many different religious traditions.
I also wanted The Brotherhood to have a saint around which to coalesce because that would make their beliefs more concrete.
My criteria for the saint included:


(2) dying as a martyr, as that foreshadowed danger and raised the stakes of the story


I found two saints who met these criteria and who conveniently shared a name – St. Andrew.


Interestingly, both were associated with Crete.
I liked having a saint from that part of the world because I planned to set some of the story in nearby Armenia, a place I’d traveled to and found fascinating because of its history as having become the first country to name Christianity as its official religion.
The martyr Andrew of Crete was executed around 767 A.D. (or C.E. for Common Era, as is more commonly used now in academia) because he defended the honoring of icons – religious images – of Jesus.


He also had a monastery dedicated to him, the Koca Mustafa Pasha Mosque in Istanbul. (That has an interesting history in itself which I’ll write about in a future post.)
While I didn’t find any particular connection between the martyr Andrew of Crete and the Virgin Mary, the other St. Andrew of Crete was known for composing and singing hymns to her. That St. Andrew was ordained a deacon at the Hagia Sophia (a location I also used in the series). In 692 he was made an archbishop on the island of Crete.

I combined these two St. Andrews into Brother Andrew, a saint to whom my fictional Brotherhood of Andrew of Crete is devoted. I added that Brother Andrew had visions about future women like the Virgin Mary and handed down a prophecy about such women and the danger to the world if events surrounding the prophecy went wrong.


Not all of this back story about Brother Andrew ended up in any of the books in the series, but I feel knowing it made my storytelling more layered.

If you’d like to know more about the two St. Andrews, you can check out the websites below.

(Fair warning if you're writing a paper on one of the Andrews and came across this article: Because I was writing fiction, I didn't make sure all my sources were well-researched and documented. I only needed enough to provide a jumping off point for my story.)

As the story grew and changed with each book, I made tweaks to the structure of The Brotherhood, to who was in charge, and to how much each member knew about its goals. I did that both to keep it a formidable adversary and to leave room for the people within it to grow and change. 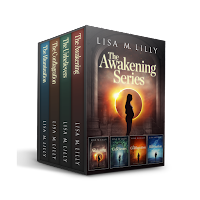 If you haven't yet finished (or started) The Awakening Series now's a great time to check it out, as the series is now complete and is available in ebook, audiobook, and paperback editions. Also, as I write this, the ebook editions of Book 1, The Awakening, are all free.

Or read the entire series in the box set/omnibus edition.

Email ThisBlogThis!Share to TwitterShare to FacebookShare to Pinterest
Labels: supernatural thriller, The Awakening, The Awakening series