This past weekend, I attended Comic Con Chicago. The panels I made it to were fun and informative, including one with X-Files cast members, one by the creator of the Facebook Page Ladies Geeking Out on gender and geek culture, and another on the intersection between film, books, television, and video games. 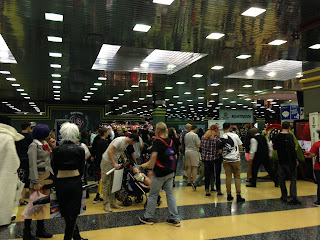 Seeing all the costumes reminded me of one of the big reasons I loved the new Ghostbusters movie. Not only did I laugh through all of it, I appreciated seeing women on screen dressed appropriately for their work. These women didn't head out to fight ghosts and monsters in bikinis, leotards, or skimpy superhero outfits. They were practical. They wore coveralls. I enjoyed seeing that added to the range of types of dress and characters portrayed at Comic Con.

Along those lines, at the geek culture panel, I learned about a great blog called Repair Her Armor. It's to help all those female superheroes out there forced to go into battle with so much skin exposed. Also, at the Hawkeye Initiative, you can see "How to fix every Strong Female Character pose in superhero comics: replace the character with Hawkeye doing the same thing." It's hilarious and highlights the  differences in how these characters are drawn.

I also got to see the car from one of my favorite 70s TV shows. Do you know whose this is? 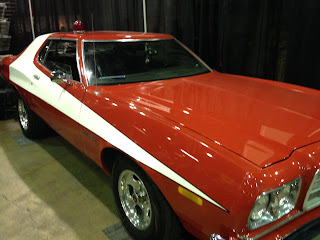 Posted by Unknown at 5:47 PM No comments:

An Illuminating Day -- The First Draft Of The Last Book

My plan for this blog entry was to share with you my thoughts on the 2016 Ghostbusters movie, which I loved. I had notes sketched out on a yellow legal pad (because I really like writing on those). But then this morning I realized I was so close to finishing the first draft of The Illumination, the fourth and final book in my Awakening series. So here I am, typing this at 5:35 p.m. central time. I don't have a cool post, but I do have a first draft. A day ahead of schedule. 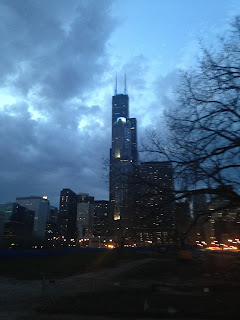 I admit I had a little time left to write a blog post, but instead I went onto ShutterStock and starting saving images of lightning strikes and illuminated cities and silhouettes of young woman I might want to use in a cover. I can't post them because I haven't bought any of them yet, but you can view them here. The photo on the left, which I took, gives the barest hint of what I'm looking for. Not the Sears (now Willis) Tower, as that won't be featured. But a cityscape with sky behind it that looks a bit ominous. Probably including lightning strikes.

One thing I'm sure I'll struggle with during rewrites is the last line of The Illumination. It's a lot of pressure, writing a closing for a four-book series. The line as it reads now is bad. (No, I won't tell you what it is.) But I'll deal with that, and a host of other challenges, including how to manage so many characters, in the rewrite. While I can't promise a final line that will be amazing--though that's my goal--I can promise it'll be better than what's there now. (No, really won't tell you.)

In the meantime, I'm heading out to see Ghostbusters again to celebrate.

Posted by Unknown at 5:40 PM No comments: