Why I Admire My Mom

For the 3 1/2 years I've written this blog, the post that has consistently gotten the most hits is Why I Love V.I. As the title suggests, it's about fictional female private eye V. I. Warshawski, created by Chicago-area novelist Sara Paretsky. The post's popularity tells me I'm not the only person who likes to read about strong women. The devoted fan base of books and movies like The Hunger Games and Divergent underscores that. Which is why I decided to write more posts about women, real and fictional, whom I admire. And the more I thought about it, the more I realized the first woman I admired was my mother. 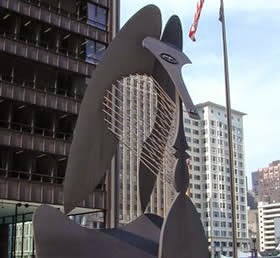 My first memory of visiting downtown Chicago involves my mom taking me to a protest. I was about nine or ten. My mom was strongly pro-life (or anti-abortion, depending how you frame it). The rally took place at the Daley Center. Groups of people waved signs and shouted slogans. I also remember my mom pointing out The Picasso in Daley Plaza. (She asked me what I thought it was supposed to be. I said a bird. She told me a lot of people held different views about what the sculpture was and struggled to explain the concept of abstract art. I still saw a bird. Really -- look at it, it's a bird.)

When I was in grade school, our suburb's village president was charged with income tax fraud and extortion. My mom helped form a citizens' group to seek more information about the charges and spread the word as, in true Chicago-area style, the man and his political party remained extremely popular. The former president was eventually convicted, and the citizens' group morphed into a competing political party. My mom never ran for office herself, but I remember her going door to door talking to neighbors about the issues, distributing political literature and posters, and organizing fundraising events.

When then President Nixon was impeached over the Watergate scandal, my mom had me watch hearings about it on television though I was in third or fourth grade. She told me I needed to pay attention because I'd never see a president impeached again in my lifetime. She also took me to the movie All the Presidents' Men. While what I mainly remember from the movie was the popcorn tasting like buttered cardboard (and while my mom was wrong about never again seeing a president impeached), that experience prompted me to read All the Presidents' Men as an adult as well as In the Arena by Richard Nixon.

I'm grateful to my mom for letting me know early on that being a citizen is a privilege and imposes responsibilities. And that if I don't think something in the world is right, I need to go out and try to change it, not wait for someone else to do something.

Today (September 26), is my mom's birthday. This post is one way to remember her. Another way I honor both my mom and my dad, whose lives were ended in 2007 by someone else's choice to drive while intoxicated, is to support AAIM, an Illinois non-profit that works to prevent DUI-related deaths and injuries and to help victims of DUI drivers. If there's a woman who influenced you in a positive way, please consider donating to a cause today in her honor. And if she's still here with you, please take a moment to let her know how she inspired you. I wish I had done that more often with my mom.

Lisa M. Lilly is the author of the occult thrillers The Awakening and The Unbelievers, Books 1 and 2 in the Awakening series. A short film of the title story of her collection The Tower Formerly Known as Sears and Two Other Tales of Urban Horror was recently produced under the title Willis Tower. If you'd like to be notified of new releases and read reviews on M.O.S.T. (Mystery, Occult, Suspense, Thriller), click here to join her email list.