What Books Are You Thankful You Read? (Favorite Books Post No. 4)

This year has been a good year, and I have more to be thankful for than I could put into a hundred posts. So, being a writer, I figured I'd narrow it down to books. Which still could take more than a hundred posts, so I decided to write about three books: one from childhood, one from college, one from the last few years. 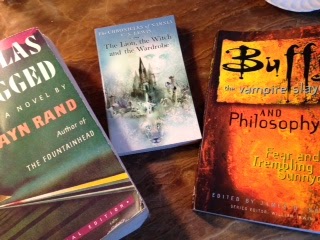 The Lion, The Witch, and The Wardrobe

In first grade, my teacher left school for several months to have a baby, and we had a wonderful substitute teacher. Every day she read to us from C.S. Lewis' The Lion, the Witch and the Wardrobe. It captivated me instantly with the scene where Lucy hides in a wardrobe during hide-and-seek. She plunges into the furs hanging there, putting one hand out so she doesn't hit the back of the wardrobe. Instead, she finds herself in a forest with snow falling around her. I wasn't sure what a wardrobe was, but from context decided it was like a closet. After that, every closet I could get to, I felt along the back for a secret door to the land of Narnia. Similarly, I didn't know what Turkish Delight, the treat the Snow Queen gives little Edmund that only makes him long for more, was. (Okay, I still don't, so if anyone would like to fill me in, feel free). I imagined it tasted like my favorite candy, which was Watermelon Jolly Rancher hard candy, only liquid so it could be poured out of a bottle. I loved to read, and I'm sure I'd already read, or had read to me, other books that involved magical worlds, but The Lion, the Witch and the Wardrobe is the first one that stands out in my mind. Lewis' vivid descriptions drew me into Narnia. And the story gave me the sense that there were amazing worlds and possibilities just a stretch of an arm away.

I came across Ayn Rand in a Philosophy 101 class. The textbook mentioned almost in passing a philosophy of enlightened self-interest that held a man's proper moral goal was his own happiness. (Ironically, that's how Rand phrased it, despite that she created one of my favorite women heroes.) My professor, when I asked to learn more, told me to read Ayn Rand's novel Atlas Shrugged, and I did. On a practical level, Rand's heroes Dagny Taggart and Hank Reardon gave me models of women and men excited and passionate about their work. Most people I knew viewed their jobs as a sort of a necessary evil, and each work week as something to be gotten through to get to the weekend. I knew few people who ran businesses or who finished college. On an emotional level, the idea that a person ought to pursue happiness changed my view of life. My mom, raised in a very poor immigrant family during the Depression, believed happiness was more likely in the next life than this one. At the time, the Catholic Church fostered that type of mindset. We were told most people needed to suffer after death in a place called Purgatory to pay for their sins. Then they could be allowed into heaven. If you suffered in life, that shortened your time in Purgatory. So my mom believed if you were too happy in life, you'd have to suffer for it later. In retrospect, I think this was her way of believing in some sort of fairness, a way to balance out that some people at least seemed to have better and happier lives than others. Atlas Shrugged gave me an alternative approach, one that said that achievement and happiness and success all fit together and that it was moral to want the same positive, good things in your own life that you believed were good for others.

Buffy the Vampire Slayer and Philosophy

I found this book while browsing in Borders one day. I love Buffy, and I'd never taken philosophy beyond the 101 class. This book seemed like a painless way to cover some of the ground I'd missed. But it turned out to do more than that. For one thing, I learned a lot about writing from it, particularly how ethics and a world view can make a story rich and layered without slowing it. Much as I'd liked Atlas Shrugged, it was as if Rand didn't trust her readers to draw the "right" conclusions, so she'd inserted treatises within the novel. Probably good for reaching someone like me who wasn't inclined to read her non-fiction cover-to-cover, but not a model of how I wanted to write fiction. Buffy and Philosophy peeled apart plots to show me how the ethics of Buffy creator Joss Whedon made the storylines stronger and the characters deeper without any preaching. The book also helped me understand my own world view and why Buffy spoke to me beyond just being a good show with strong characters. I'd long ago rejected most of Catholicism, though not the values I'd learned along the way. I struggled to articulate the source of my beliefs on right and wrong. The first essay in Buffy and Philosophy speaks to this, positing eudaimonism as the ethical basis of Buffy. Eudaimonism "holds that the basis of moral goodness is the fulfillment of human nature to its highest potential....The Buffyverse consistently reflects the Platonic view that a just person is always happier than an unjust person." (See the first essay, Faith and Plato, pp. 7-8.) The essay shows how this plays out throughout the show and in spinoff Angel, particularly through the dynamic of Buffy and Faith, initially drawn as the "good slayer" and "bad slayer."

So those are my three books. I'd love to hear about yours, so feel free to comment below. And Happy Day-After-Thanksgiving!


Lisa M. Lilly is the author of Amazon occult best sellers The Awakening and The Unbelievers. Her poems and short fiction have appeared in numerous print and on-line magazines, including Parade of Phantoms, Strong Coffee, and Hair Trigger, and a short film of the title story of her collection The Tower Formerly Known as Sears and Two Other Tales of Urban Horror was recently produced under the title Willis Tower. If you'd like to be notified of new releases, click here to join her email list. The Awakening series is also available on barnesandnoble.com.
Posted by Unknown at 3:40 PM 1 comment: