My mom and dad had in their bedroom three large bookcases, which I thought of as my mom’s because nearly all the books were hardbacks she’d bought from book-of-the-month clubs she’d belonged to in the 1950s and 60s. The books had a slightly musty yet dry old paper and cloth smell I love to this day. Most of them had plain cloth bindings with titles that were barely visible on the sides, as the paper jackets had fallen apart and been discarded. 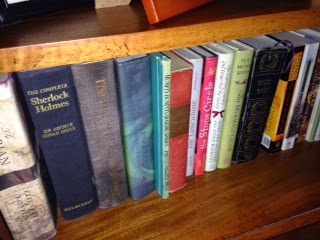 My favorite book on those shelves was The Elegant Witch. Set in England in the early 1600s, the writing style and sense of irony remind me of Jane Austen, but the plot and mood is suspense/mystery. Protagonist Margery, youngest sibling and misfit in her Puritan family, is sent to live with her kinsman Roger, a Justice of the Peace in the small town of Pendle. Mysterious deaths and illnesses occur often in Pendle and accusations of witchcraft are common. Margery is smart and brave, and she helps Roger with his Justice of the Peace duties and helps unravel the source of the evil in Pendle. (See my full review here.)

Another favorite was The Emperor’s Lady about the life of Empress Josephine of France. It starts when she’s a young woman embarking on an arranged marriage to a pompous young man. I was fascinated by this woman who married, divorced, established a fashionable Paris salon, married Napoleon, was crowned Empress and died without her crown. Josephine was smart and went after what she wanted. She was also unconventional, engaging in infidelities, giving her husband business and political advice, and warring with her in-laws, who spent a lot of time trying to get her set aside because she could no longer have children. The Emperor’s Lady sparked a lifelong interest in France. I was thrilled when despite living on a very tight budget, my mom and dad sent me on a week long school trip to London and Paris, though my parents hadn’t been to Europe themselves and rarely took vacations at all other than to visit family. During the trip, I visited Malmaison, Josephine’s country castle.

I also loved a book called The Concubine, a fictionalized biography of Anne Boleyn, second wife of Henry VIII. This portrait of Boleyn is far more flattering and probably somewhat more historically accurate than the later book, The Other Boleyn Girl, that was so popular a while back and was made into a movie. In The Concubine, Anne is portrayed overall as neither victim nor villain, but as a complex woman struggling to make the best of the limited options open to a woman in her social position and time period. Over the years, I read several biographies of Boleyn and continue to be fascinated with her. I’ve also read and reread The Concubine to study how author Norah Lofts created such a strong character.

That my mom had a number of books about women, real and fictional, who were strong and didn’t allow themselves to be boxed into the roles society dictated for them isn’t surprising, though when I was a young adult I would have thought it was. While my mom encouraged me to become educated, think for myself, and take advantage of opportunities she never had, as two smart, determined women who were certain we were right (most especially when we disagreed with each other), we often clashed. Over forty years separated my mom and me, so our frames of reference for women’s roles, religion, work, and nearly everything else differed significantly. But at my mom’s funeral, my godmother – a very great lady who recently passed away – gave me a gift. She told me she wished I’d known my mother when my mom was a young woman. Gloria said my mom had done all sorts of things that women her age were not supposed to do. Took trips to New York and California at 18 years old with just another girlfriend and no chaperones, earned her own money, bought her own car, waited more than a decade longer than her friends to get married. Talking with Gloria, I realized that the very traditional, conventional mom I thought I’d had was probably not that different from me after all. It only seemed so because we’d been born in such different times. If I’d thought more about what my mom kept on her bookshelves, I might have realized that sooner.

Lisa M. Lilly is the author of the occult thrillers The Awakening and The Unbelievers, Books 1 and 2 in the Awakening series. A short film of the title story of her collection The Tower Formerly Known as Sears and Two Other Tales of Urban Horror was recently produced under the title Willis Tower. If you'd like to be notified of new releases and read reviews on M.O.S.T. (Mystery, Occult, Suspense, Thriller), click here to join her email list.