A Four Book Series And The Forced Pregnancy Narrative

Many people have asked why I made The Awakening a four-book series. I asked myself the same question yesterday after I approved the final print proof for The Conflagration, Book 3 in the series, and revised my handwritten outline for Book 4, The Illumination. (You can get The Conflagration now in ebook form if you don't want to wait for the paperback.) It's not that I don't love my main character, Tara Spencer. Despite all the awful events I've put her through, I do. She and her allies and foes are my favorite characters of all those I've written about. But if I had made the series a trilogy, I'd be finished now. I'd miss them all. But I'd be finished. As someone who likes to check off boxes for completed tasks on lists, that appeals to me.

So why write four books? As I talked about in the Author's Note at the end of The Conflagration, originally I envisioned The Awakening as a standalone novel. But as I revised it before publishing, I realized there was much more to Tara's story. I've always been intrigued by world-changing pregnancy narratives, Rosemary's Baby and The Terminator being my favorites. On the one hand, that trope gave us one of our most well known female action heroes in The Terminator. On the other, that narrative seems to say the woman protagonist derives her significance from the fact that she may give birth to a special child, and that it's only acceptable for her be proactive, to fight, if it's to protect her child. That's not the story I felt compelled to tell.

Tara is a hero not because of the child she might have but because of the values she holds and who she is, so her story goes far beyond having to deal with a pregnancy that was forced upon her. I also wanted to deal with the issue of the forced pregnancy itself. As in, regardless of end goals or motives, what are the ethics of causing a supernatural or mystical pregnancy for a woman who had no part in the plan? As I plotted The Unbelievers (Book 2), I discovered it took me to a natural midpoint both for Tara's personal journey and for the bigger picture of how and why she came to be pregnant and what it means for the world. So -- four books.

Now Available For Preorder: Book 3 In The Awakening Series 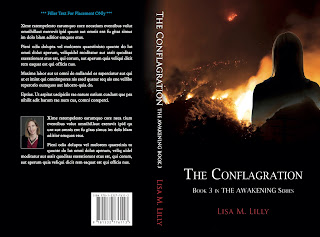 Six months after giving birth to a mysterious child whispered to be the Antichrist, Tara Spencer fights for her life as she searches for her kidnapped baby girl.

While Tara follows leads, she also must struggle to make sense of a shocking prophecy about her own growing power and place in the battle between good and evil.

Denounced by some as a fraud and feared by others, Tara desperately aligns herself with foes who attempted to murder her only days ago. But can she come to terms with what she's learned about herself and control her power in time to save her daughter?

The Conflagration is the third installment in the four-book Awakening series by Lisa M. Lilly, author of The Awakening and The Unbelievers. She lives and practices law in Chicago.

Posted by Unknown at 8:20 PM No comments:

Email ThisBlogThis!Share to TwitterShare to FacebookShare to Pinterest
Labels: supernatural thriller, The Awakening, The Conflagration, The Unbelievers

Lost Gospels From the Fourth Century 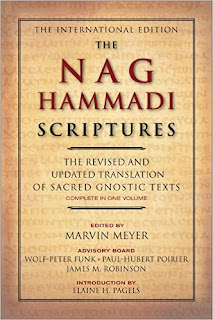 If you've never heard of the Nag Hammadi documents, think Dead Sea Scrolls but less well known. The Nag Hammadi Scriptures contain English-language translations of fourth-century papyrus gospels unearthed in Egypt in 1945. I relied on an earlier compilation of the translations in my research for The Awakening series.

Inside, you'll find many lost texts the official Catholic Church rejected, including the Gospel of Mary, the Apocalypse of Adam (where Adam speaks to his son Seth), the Gospel of Judas, the Gospel of Thomas, and two I used in the Awakening series, The Trimorphic Protennoia and The Thunder, Perfect Mind. (You'll see reference to the latter in Book 3, The Conflagration, which will be released May 17, 2017.) Both of those texts are poetic and both lend themselves to a focus on the feminine aspects of God. I liked reading them because they interested me even if I hadn't been looking for inspiration for my fiction.

Other texts I found hard to follow, and still others seemed so out of whack (that's a technical term) to my modern-day eyes that I wasn't surprised the Church disregarded them. Whether they made sense at the time and were rejected as contrary to official Church teachings, I don't know.

This edition in particular of the Nag Hammadi Scriptures makes me cheer for Amazon and other platforms for selling books on line. When I first learned about these manuscripts, the compilation of translated versions was only available through academic publishers at a cost of over $700. Later, I bought the edition I still have through Amazon for about $60. As I write this, the price is $12.99 for Kindle and $15.48 for paperback, with many used copies available for less.

If you are interested in the origins of Christianity and how and why some of the earliest texts were excluded from it, this is well worth the read.