Extant, Transcendence, and Who’s Talking To Whom

The concept of recent sci-fi movie Transcendence – what if a human’s brain becomes an A.I.? – fascinated me, and I enjoyed the film. What bothers me is that despite one of the two main characters being a woman, Dr. Evelyn Caster, I can’t remember, in the entire movie, any woman speaking one-on-one with any other woman. About anything.

I understand men outnumber women in the hard sciences, but Evelyn has not a single woman friend to support her in a crisis? I also understand that writers can’t throw in scenes solely to show a character has friends. Yet, somehow, men in the movie talk to one another, not only to women. It wouldn't be so bad if Transcendence were unique. But in so many action, sci-fi, and suspense movies, and often TV shows as well, women interact primarily, if not exclusively, with men. Even in romance movies, where women are shown as having female friends, the only topic the women typically discuss  with each other is men. I can’t help wondering whether film and television writers and directors truly believe this is how women’s lives work. 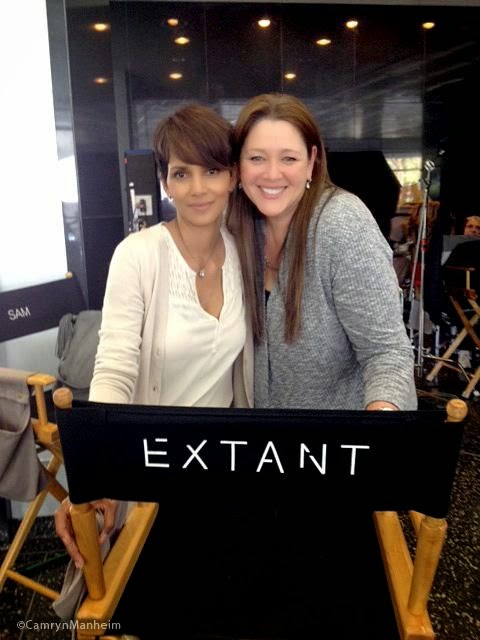 One reason I love the new CBS show Extant is the relationship between main character Molly and her best friend and physician Sam (Samantha). I started watching Extant because of the mysterious pregnancy aspect. No surprise, given my love for the book Rosemary’s Baby and movie The Terminator. Extant is well acted, with compelling plot lines, and I love the Sam/Molly dynamic. Molly trusts Sam, and Sam puts herself and her career on the line for Molly. When drastic circumstances push them into conflict, they strive to understand one another through the depths of their anger and fear rather than becoming enemies or, worse, engaging in the emotional equivalent of a hair-pulling fight. Or, worse still, engaging in an actual hair-pulling fight, which I’ve never seen two women do in real life, but have seen several times on TV.

Women colleagues have played a pivotal role in my life. Soon after I became a lawyer, I had a case opposite a woman attorney who also had just started practicing law. Each time we appeared in court, we waited our turn among about thirty other lawyers – nearly all men. The opposing attorney and I argued vigorously in court, but before and after we talked about being lawyers, our law schools, and where to find good pantsuits (most stores sold only skirt suits at the time). We ran into each other at professional events after the case was over and eventually became friends. Ten years later, I stood up at her wedding. Other women attorneys generously shared information about finances, hiring staff, and computers when I started my own law practice.

In my writing life, too, women have been wonderful advisers and friends. Through social media, I met New York Times bestselling author Melissa Foster, who invited me to join a thriller book launch she organized and gave me marketing advice. Through Melissa, I met Chicago-area horror author Carrie Green. Carrie and I had a blast presenting a panel at Chicago Comic Con called Girls Gone Gore. (The title was Carrie’s idea – mine was much less exciting – Women Writing Horror.)

Men, too, have been wonderful mentors and colleagues to me, and I owe several a great debt. So my point is not that women are better friends and mentors to women than men are. My point is that women are friends and advisers to one another. If I saw more stories like Extant that portrayed women as the real people we are, with professional and personal relationships with one another that are as strong and varied as men’s are, I would go to movies and watch television a lot more. I suspect a lot of other women would to.


Lisa M. Lilly is the author of Amazon occult best seller The Awakening. Her poems and short fiction have appeared in numerous print and on-line magazines, including Parade of Phantoms, Strong Coffee, and Hair Trigger, and a short film of the title story of her collection The Tower Formerly Known as Sears and Two Other Tales of Urban Horror was recently produced under the title Willis Tower. If you'd like to be notified of new releases, including The Unbelievers (The Awakening, Book 2), click here to join her email list. To pre-order The Unbelievers for Kindle click here.

Reader Kerri Geiser attended a book release party for the paperback edition of The Awakening and won the right to have a character named after her in Book 2 in the series.  Below is an excerpt that includes an interchange between her character and Tara's father, Pete Spencer, from The Unbelievers, set to be released in September, 2014. These scenes occur around the middle of The Unbelievers but contain no spoilers, so feel free to read away:

Pete lay on thin carpet over what felt like a metal floor that swayed beneath him. His shoulders ached. When he opened his eyes, he saw only black. No light seeped in around the edges of the blindfold. His hands were bound behind him.

Bouncing, rattling. A van. I’m in the back of a panel van. He tried to move his feet, but they, too, were tied together. At least he wasn’t gagged.

Pete kicked his feet in unison. They hit what felt like metal. A clanging sound echoed around him. He rolled along the carpeted floor until he banged into what must be a side of the van. It seemed too long to be the back. His body fit lengthwise against it. His head felt fuzzy. He had no idea how long he’d been out. 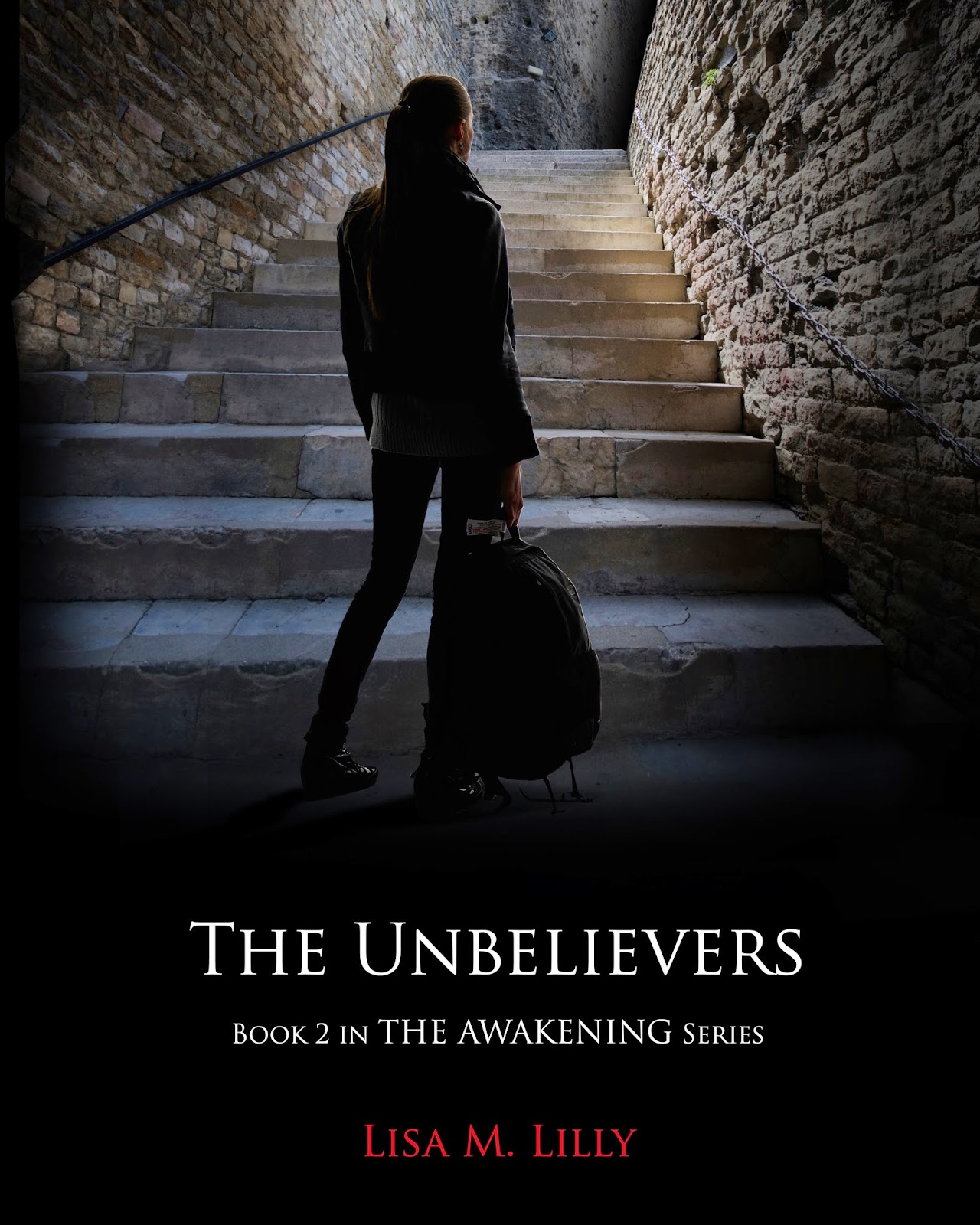 The van jounced, and his right knee smacked the floor at the perfect angle to send shooting pain along his inner thigh. His shoulders and upper arms ached from having his hands behind his back. Otherwise, though, his body didn’t seem battered. Pete worked his wrists and felt the rope stretch. Whoever had bound him hadn’t done so tightly. He considered whether Cyril had lured him to the church and set the trap. But much as he wanted to blame Cyril, he couldn’t see what the man stood to gain.

But if Cyril’s not part of this, where is he? And what could anyone else want with me?


Pete froze, forgetting the ropes for a moment. Tara. They want to get to Tara.

A door slammed. From inside the panel van, heart hammering, Pete listened to footsteps crunch in snow. He simultaneously regretted that he’d stayed so distant from Tara since Fimi’s birth and cursed her for not keeping quiet about her unusual pregnancy. Telling anyone beyond the family placed them all in danger.

“My name is Kerri Geiser, Mr. Spencer. I will open the doors in a moment. I apologize for the method of transport. It is important that you not know where you have been taken if you decide not to help us.”

A woman’s voice, but not the priest’s wife. The accent sounded Russian, with rolled R’s, stressed syllables, and the W’s pronounced like V’s.

Help you do what? Pete thought, struggling with the ropes around his wrists. Was it a bad sign that Kerri Geiser had given him her name? If it was her real name. For the first time, he wished he’d taken boxing or martial arts like his father had wanted him to do. He might know something more about fighting, as Cyril no doubt did. He’d been in pretty good shape before Megan’s death; he’d found a way to work out every other day, at least by swimming half an hour at the Y. But since then he’d let it slide, and he’d become softer and weaker. He’d let a lot of things slide.

He heard creaking as the doors opened, and a blast of icy air hit him. His down jacket had come most of the way unzipped, and he was sweating from his struggles, so he felt chilled and clammy. No light seeped in around the edges of the blindfold, so it must be after sunset.

“Slide forward until you sit at the back bumper of the van,” Geiser said.

He inched his body through the dark toward the cold air, his shoulder joints protesting the unnatural position they’d been forced into. Based on her voice, Pete guessed the woman’s age as mid-thirties. But he was probably wrong. He’d met many clients in person after speaking to them on the phone whose voices matched their looks not at all.

“Why am I here?” He maneuvered into a sitting position, a challenge with his hands behind his back, and put his feet on the ground.

The Unbelievers by Lisa M. Lilly will be released in September, 2014.  If you'd like to be notified of the release date, please click here to join the author's email list.