Sin, Sex and the Art of Persuasive Writing

My parents used to subscribe to a Catholic magazine with a column for young adults. When I was in high school, I read one of the columns that advised teenagers that the Bible clearly showed pre-marital sex was wrong - just look at the Sixth and Ninth commandments. I didn't remember anything in the Ten Commandments about pre-marital sex. I checked my parents' Bible (no Internet at that time, so I used the index - remember those?). The Sixth Commandment prohibits adultery. The Ninth prohibits coveting "thy neighbor's wife" and his goods (which raises a whole other issue of women being considered possessions, but that's for another post). I concluded, rightly or wrongly, that the Bible didn't say anything about sex before marriage or the author would have quoted it, not fudged. I also viewed every article in that magazine from then on with great skepticism.

That experience illustrates two important facets of persuading people. One is well-known to most lawyers -- that of putting your best argument first. If your first argument is weak, your reader or listener may never get beyond it. The second is credibility. Because I checked the source material and found it didn't say what the article's author claimed it did, I no longer found that author, or the publication, credible. Both lost the opportunity to persuade me not only of that one point, but of anything.

These principles apply to fiction, too. Novelists all are attempting to persuade readers. To do what? To believe in the fictional world the author created and to care about the characters as if they were real people. That's a big part of what's happening, or not, when customers in a bookstore or on-line read the first paragraph or two of a book. That first page either pulls the reader in or it doesn't. While a lot of authors feel frustrated that potential buyers judge a book by reading no more than the first page (assuming they've liked the cover in the first place), most of us do exactly that when we browse books. That's why I rewrite the first page of my novels close to a hundred times before publication.

Credibility also matters. This morning I revised a scene where a woman exits the River City high rise complex and hurries through Chicago's South Loop after dark. A stranger starts to follow her. What I want the reader to wonder at that point is "Who is the stranger? What does he want? Will Sophia reach her office safely?" But if I'd said she was walking through Lincoln Park instead, someone who knows Chicago's neighborhoods well would forget about the story and wonder: "Isn't River City in the South Loop? Does this author know Chicago at all? Doesn't she check Google maps?" With that one error, my reader is no longer persuaded that the scene or the character is real. If I've otherwise done a good job, the reader might forgive me and read on. But if too many errors break the narrative, it becomes more likely the reader won't return to the book.

So there you have it - sin, sex, and persuasive writing. And you thought it was just a catchy title.

Lisa M. Lilly is the author of Amazon occult best seller The Awakening. Her poems and short fiction have appeared in numerous print and on-line magazines, including Parade of Phantoms, Strong Coffee, and Hair Trigger, and a short film of the title story of her collection The Tower Formerly Known as Sears and Two Other Tales of Urban Horror was recently produced under the title Willis Tower. She is currently working on The Awakening, Book II: The Unbelievers.
The Awakening for Kindle: http://amzn.to/pFCcN6

The Military, Make Up, and Rereading Katniss (Favorite Books Post No. 1)

Recently I reread the Hunger Games trilogy. It was great fun, and the themes seemed particularly timely. (I'll do my best not to spoil any of the plot for those who haven't read the whole trilogy.) 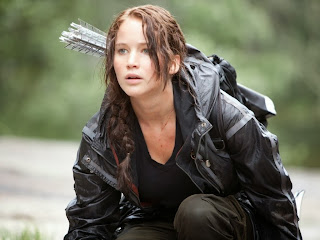 (1) Women in Combat: In the Hunger Games, each combatant (known as a tribute) competes to become the sole survivor. The arena for the games changes from year to year and even within each game. A combatant might face mountains, drought, fire, floods, or all of the above. Author Suzanne Collins does an excellent job of showing how each challenge requires different skills and traits. In one scenario, being a fast swimmer is the most important skill, and brute strength provides little or no advantage. In some parts of the game, a young, small tribute outwits and outmaneuvers larger, stronger and tougher opponents because she's stealthy and quick and can swing from treetop to treetop without being noticed. Knowing what plants can be eaten and having the skill to distinguish between ones that are medicinal and ones that are poisonous also can be vital -- another skill that has nothing to do with strength or size. While The Hunger Games and its sequels are fiction, they raise good questions about what makes someone able to handle combat situations or survive in hostile territory. That seems appropriate at a time when the U.S. is inching toward allowing women in combat positions for the first time.

(2) The Importance of Appearances: Before they compete, tributes undergo a rigorous remake of their images, and those images are vital in getting sponsors. Sponsors are people with money who send tributes things they need to survive during the Games. The boy tributes have style consultants just as the girls do. But the girls are subjected to more intense treatments that generally do nothing to help them in combat. While she's being put through hours of waxing, eyebrow tweezing and skin polishing, Katniss reflects on how her male counterpart, Peeta, has this same time free. He can rest or eat during those hours to build his strength, train longer to hone his skills, or schmooze with potential sponsors. This echoes U.S. culture, though obviously the books present this in a larger and more dramatic way. But studies show that women who wear make up are viewed as more professional than those who don't, leaving women who choose not to use cosmetics at a disadvantage. Then there's wardrobe. For men, the standard business attire is a neutral suit and tie or, for business casual, a long-sleeve shirt and khaki pants. There is no neutral for women. A skirt suit can be too girly, a pants suit too manly, a gray outfit too boring, a fuschia blouse too frivolous. (Think of the 2008 primaries -- no one commented on John McCain's or Barack Obama's pants suits.) My routine is pretty basic, and I still spend about 20 minutes every morning on hair, make up and clothing choices, 20 minutes my male colleagues don't need to spend. That's over 120 hours a year, the equivalent of 2-3 work weeks. I could take a vacation, earn another 3/4 of a month's pay, or finish rewrites on my current novel in that time. Not to mention what cosmetics cost. I spend an average $30 a month on cosmetics and skincare. That's $360 a year, which would buy a plane ticket for that vacation.

(3) Likeability: Much of the preparation of Katniss for the Hunger Games involves making her likeable so she can attract sponsors. Katniss is fierce, stubborn, smart, strong and resourceful. All great qualities for survival, and if she were a boy, particularly a large boy, those qualities would get her sponsors. Everyone likes to bet on a winner. As a girl, though, she needs to project vulnerability, niceness (even to the people who are orchestrating a game whose aim is to kill children), and loveability, regardless whether the boys she competes against project those qualities or whether those qualities in themselves will help her win. This reflects many real women's experiences. Women are generally raised to place a premium on relationships, being nice, and being liked. Indeed, many women report being told by strangers on the street to smile if they look too serious or stern, something I suspect never happens to men. Similarly, when men are demanding bosses, take hardline positions, or grab the spotlight in meetings, these qualities are seen as signs of strength and leadership. Women who exhibit these behaviors are more often seen as too aggressive, and aggression is almost always viewed negatively in women. At the same time, women are instructed that to get ahead, they must adopt male body language (see, for example,
10 Common Body Language Traps for Women in the Workplace) or typically male approaches to business to succeed (see Nice Girls Don't Get the Corner Office).

The reality is, as in The Hunger Games, different qualities, strategies and skills work for different people at different times. There is no one "right" way to behave in every situation. But because the standard for so long has been based on how men behave, women still struggle either to show how they match the male model or why their approach is just as effective. (For a good book about women, men and leadership, check out Closing the Leadership Gap by Marie C. Wilson.)

As a writer, I aim for my work to entertain and intrigue first. Then I hope that after readers close the book, questions and ideas linger about the conflicts the characters faced and how they reflect the real world. I admire the way Suzanne Collins manages that throughout the Hunger Games books without slowing the story for a second.

What are you favorite thrillers, and how do they reflect the larger world around us?

Lisa M. Lilly is the author of Amazon occult best seller The Awakening. A short film of the title story of her collection The Tower Formerly Known as Sears and Two Other Tales of Urban Horror was recently produced under the title Willis Tower. Her poems and short fiction have appeared in numerous print and on-line magazines, including Parade of Phantoms, Strong Coffee, and Hair Trigger. She is currently working on The Awakening, Book II: The Unbelievers.
The Awakening for Kindle: http://amzn.to/pFCcN6