Did The Virgin Mary Influence The Supreme Court?


In 2014, three corporations argued to the United States Supreme Court that paying premiums for health insurance made them a cause of abortions. Everyone - the Court, the government, and the corporations - agreed that the insurance didn't cover abortions. But it did, as the Affordable Care Act required, cover IUDs and emergency contraception. 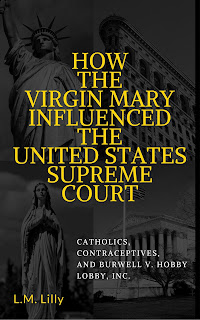 The shareholders of the corporations believed those methods of birth control were the same as abortions and argued requiring them to provide this insurance violated their religious freedom.

The five justices in the majority were Catholic. The corporations' religious objections mirrored those of the Roman Catholic Church.

How The Virgin Mary Influenced The United States Supreme Court looks at whether Catholic views about the perfect woman, sex, and birth control influenced the Court's decision. The Kindle edition, which is free 4/6/17 through 4/8/17 (and always free for Kindle Unlimited subscribers), talks about:


How much did the Catholic view of women and the Virgin Mary really influence the Court?

Download the Kindle edition today and see for yourself.

P.S. Don't have a Kindle? Order the paperback edition here.
Posted by Unknown at 2:42 PM No comments: