I love to read horror, suspense, mysteries, and thrillers, all books that fall within the category of genre or popular fiction. Probably because I write them as well, it disturbs me that even people who love those types of books at times refer to them as “trash” or feel embarrassed about reading them. I’m not sure where this idea came from. Shirley Jackson wrote horror, and I read her short story The Lottery in honors English class in high school. Perhaps a book needs to be a certain age to be considered “literature.”

So for all those who, like me, love reading books by Stephen King, Sara Paretsky, Mary Higgins Clark, Tess Gerritsen, Dean Koontz and the other similar writers, here are seven reasons to hold your head high while carrying their books onto the airplane: 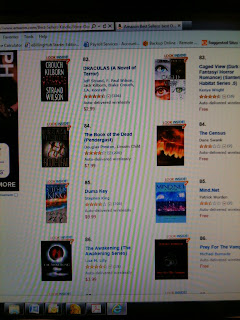 1. Education: In junior high, I read a romance novel set during the French revolution and another novel based on the life of the Empress Josephine. So began my love of the French language and culture. The historical figures and events I read about gave me a reason to want to know more about them, and I learned French and traveled to Paris later in life. Also, understanding a small amount of French history gave me a larger context regarding the American Revolution, philosophy, and foreign relations that I otherwise would have lacked, as history class in both high school and college left me cold.

2. Empathy: Fiction lets us all step into the shoes of characters who have backgrounds, experiences and attitudes completely different from our own. Reading good genre fiction is an especially effective way to do this. Why? Because we need to truly know and care about the characters for it to matter whether a poisonous fog engulfs them or zombies are banging at the door. For that reason, the best genre writers develop their characters in more depth than do other authors, often taking us right into those characters’ minds and hearts. And in a truly great novel we care about the monster, too. Reread the passages in Frankenstein from the monster’s point of view highlighting his isolation and loneliness. For a somewhat more contemporary example, think of the genetically-engineered antagonist who loves Mickey Mouse and feels unfairly treated in Dean Koontz’s Watchers. Understanding of other political perspectives can be gained, too. I don't expect Dean Koontz's nightmare scenarios to come true, but underneath his fantastical plots are kernels of truth about real life scenarios that can and do occur. His fiction helped me better understand why I may have a totally different view on the topic of gun control from someone who grew up in a rural area and/or someone who has had experiences that create strong reasons to be skeptical of police and government.

3. Perspective: Most genre books include larger-than-life situations and characters. King's The Stand deals with an apocalypse through plague and, if that's not enough, an epic battle of good and evil among those who are left. Writers like John Sandford and Tess Gerritsen address stories with natural, not supernatural, antagonists, but still usually depict the most extreme types of crimes, such as murders committed by serial killers. Reading about the end of the world can remind us that as stressful as real life can be, most challenges we face are manageable.

4. Support: At the same time, terrible things do happen. Divorce, death, extreme financial hardship. In the midst of trying to cope with real tragedies, it’s often hard to share how we feel with others. Reading about the inner life of a character with similar experiences can help us feel less alone. My parents died within seven weeks of one another due to injuries they sustained when hit by an intoxicated driver. Reading about characters who lost a loved one suddenly or violently helped me understand that the sense of disconnection and anger I felt, and the difficulty moving forward, were not signs I was losing my mind – they were part of the grieving process. It also helped me believe I would get through that time. While the characters I read about were fictional, their feelings and thoughts were so real that I knew the authors had either been through a similar loss or researched the experience. Either way, it reassured me. Talking with real people helped, too, but sometimes I was too overwhelmed to do that.

5. Heroes: Many novels thought of as literary feature unlikeable and deeply flawed or morally ambiguous protagonists. In contrast, genre fiction almost always features a hero – the woman or man who fights the monster, tracks down the killer, sparks a revolution. Why is that important? These characters provide a model for doing the right thing in times of extreme stress. Real life offers some real heroes, but the media are more apt to focus on the antics of dysfunctional politicians and provide a steady stream of warnings and reports about danger and disaster. That type of news is important, too, but we all need heroes to emulate. At a reading for one of her books about the female private eye she created, V.I. Warshawski, Sara Paretsky told about a woman who’d written her who’d lost her mother at a young age. The mother, before dying, told her daughter to read the V.I. books, and that was how she’d know what kind of person to be. Given how I feel about the character (see Why I Love V.I.), I completely understand that.

6. Ethics: The best genre fiction asks more than Whodunnit. It asks questions such as why people take certain actions, what the consequences – intended and unintended – are of those actions, or even how the human race can best move forward. For example, my favorite thriller writer, Gary Braver, examines what a good person would do to get and keep access to the fountain of youth, and how that affects both the individual and the larger world in Elixir. In Gray Matter, Braver examines the ethics and consequences of a medical procedure to enhance children’s intelligence. In The Dead Zone, my favorite King novel, Johnny Smith discovers he can see certain events in the future. This raises questions about his options for taking action, the needs of the one versus the needs of the many, and the ethics and effectiveness of fighting fire with fire. These types of issues can be debated in an ethics class or on Sunday morning TV, but when part of good fiction, ironically, they become more real and compelling.

7. Order: Ayn Rand called what she wrote Romantic Realism – presenting life and human beings as they might be and ought to be. Most of us, when struck with tragedy, struggle with why it occurred and how to cope. Definitive answers are hard to come by. Even wonderful happenings can cause stress if we’re afraid of loss or aren’t sure we can repeat our successes. Good genre fiction, in contrast, offers order and a purpose – in other words, a clear plot and theme. Within a suspenseful and moving story, the types of questions raised in No. 6 above are answered. The conflicts and crises depicted are resolved. Tess Gerritsen’s Maura Isles solves most of her cases and works through some of her personal issues. She still struggles, but progress is made. John Sandford’s Lucas Davenport apprehends the criminal or doesn’t, but we find out what happened and why. For that reason, for me, reading and writing genre fiction is like therapy. At least for the time I’m in that fictional world, everything serves a larger purpose; everything means something.

Lisa M. Lilly is the author of Amazon occult best seller The Awakening. Her poems and short fiction have appeared in numerous print and on-line magazines, including Parade of Phantoms, Strong Coffee, and Hair Trigger, and a short film of the title story of her collection The Tower Formerly Known as Sears and Two Other Tales of Urban Horror was recently produced under the title Willis Tower. She is currently working on The Awakening, Book II: The Unbelievers.
The Awakening for Kindle: http://amzn.to/pFCcN6